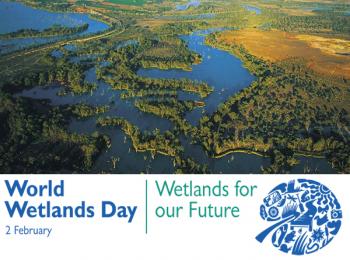 World Wetlands Day is celebrated every year on 2 February. This day marks the date of the adoption of the Convention on Wetlands on 2 February 1971, in the Iranian city of Ramsar on the shores of the Caspian Sea.

Since 1997, the Ramsar Secretariat has provided outreach materials to help raise public awareness about the importance and value of wetlands.

The Standing Committee of the Ramsar Convention on Wetlands approved Wetlands for Disaster Risk Reduction as the theme for World Wetlands Day in 2017, during its 52nd meeting held in Gland, Switzerland from 13 – 17 June 2016.

This theme is selected to raise awareness and to highlight the vital roles of healthy wetlands in reducing the impacts of extreme events such as floods, droughts and cyclones on communities, and in helping to build resilience.

Outreach material to support country activities organized to celebrate World Wetlands Day 2017 and raise awareness about the value of wetlands for humanity is available to download here.

Since its inception, the production and distribution of materials for World Wetlands Day have been financially supported by the Evian Project funded by the Danone Group.